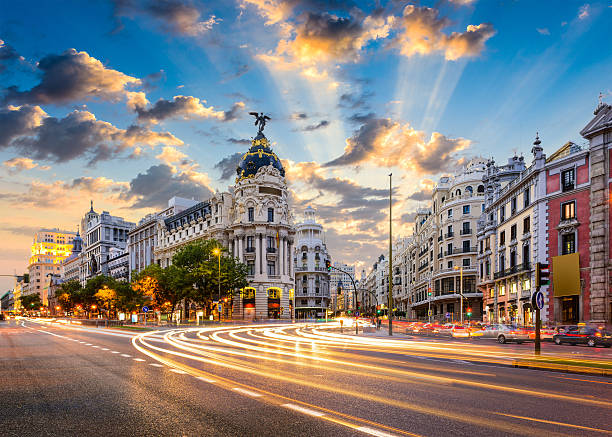 Spain is located on the Iberian Peninsula together with Portugal and one of the six European microstates, the Principality of Andorra. Spain is surrounded by the Atlantic Ocean and the Cantabric and the Mediterranean Sea. It also counts on two archipelagos, the Canary and Balearic Islands; and two autonomous cities in North Africa, Ceuta, and Melilla. The Iberian geography has a great impact on the climate, fauna, and flora of the country. Thus, there is a huge diversity and a broad difference in landscapes, weather, animals, and plants; ranging from the greenish and rainy North, which reminds of Ireland and Scotland, to the drier and charming South, full of colors, light, and world-famous local customs.
Spanish is the second most spoken language in the world. More than 80 million tourists a year visit Spain, attracted to the country for its rich culture, lovely weather, amazing beaches, and the friendliness of the Spaniards.

Spanish is the official language all over the country. However, Catalan, Basque and Galician is also co-official languages in some regions. There are other dialects and Spanish variations, but this might have little or no impact on the student’s language learning.
The school year starts in mid-September and ends in June (beginning of the month for students who pass every subject, end of the month for those re-sitting exams). The year is divided into three terms interrupted by Christmas and Easter holidays. Lessons take place from Monday to Friday, normally from 8 am to 2 pm.
The Spanish school system is not known for being particularly flexible in terms of subjects, as the Ministry of Education approves and states the subjects most students should take. They are though several itineraries offered, such as Pure Sciences, Social Sciences, and Humanities.
Compulsory subjects for all students: Spanish language and literature, English, Philosophy & Physical Education.
Itinerary subjects: (3 subjects per itinerary, *marked subjects are mandatory).
Pure sciences: Maths*, Physics & Chemistry, Biology & Geology, Technical Drawing.
Social sciences: Maths applied to social sciences*, History of the contemporary world, economy, literature.
Humanities: Latin*, Greek, history of the contemporary world, universal literature, art history.
Elective subjects (2 subjects to be studied 2h/week): music, religion, ethics, artistic/technical drawing, industrial technology, IT, second language: French or German, applied anatomy, scientific culture, co-official language in the area if that’s the case.

Two trips are organized during the year, where students have the opportunity to gather and share their experiences with other international peers, as well as visit new places in the Iberian Peninsula, practice sports and learn from cultural activities. They normally last five days and have an extra cost of approx. 400€. – The first trip is to San Sebastian (in the Basque Country) and normally takes part in December. – The second trip is a surf camp in Portugal and normally takes place in May-June.
Spanish people are friendly, open, and eager to welcome and help foreign students. You will end up loving this lifestyle full of big family and friend gatherings, long days outdoors, sports, cultural activities, hectic social events, and great food!

In Spain, days are long, and the students will learn to make the most out of them. Not all schools offer extracurricular activities or sports teams, but students will surely have the chance to practice them either in their neighborhood sports hall or somewhere else in the city/ town. In Spain, among many other things, students can practice soccer, basketball, tennis, surfing, windsurfing, skiing, dancing, different musical instruments, and drama.